It’s last second but the following is my entry to The Penprints Flash Fiction Dash. Flash fiction is a story told in 1000 words or less. The challenge: “to write, to venture into a new story, and to exercise certain writing muscles that are typically neglected.” Mine clocks in just barely under 1000 words so yes – I have a hard time with brevity – which is why I took up the challenge. I was provided with a unique prompt – the below picture – and given three weeks to write so, of course, I wrote it yesterday. The following story is the result. This is the first time I’ve shared my writing on this blog (aside from ancient writing) so I hope you enjoy! 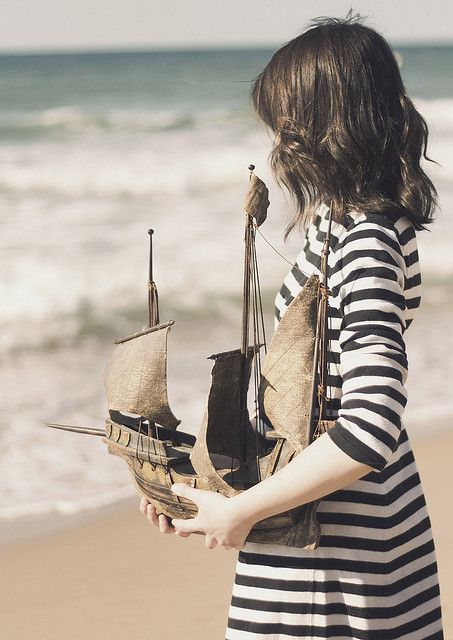 (Disclaimer: I do not own this picture and take no credit for it.)

The Reeducation of Kylee Flintlock

Kylee tightened her grip on the sculpted boat in her arms. The burnished wood slid against the cotton of her black and white striped dress. Her hands wrapped around its girth, careful to avoid the masts, sails and delicate rigging.

She made her way down the sandy path overhung with palm trees that led to the beach. Murmurs of voices mixed with the sound of waves breaking on the treacherous reefs that surrounded the island. The last to arrive, of course. But that was okay – today all eyes should be on her and her talent.

She stepped out of the trees and a cluster of men and women, all dressed in the same striped uniform, broke off from conversation to watch as she strode into their midst.

“So!” Elkan, the instructor of her class, stepped out from the their midst and clapped his hands together. “What does our star sculptor have for us today?”

Kylee smirked, concealed by the loose waves of shoulder-length brown hair that hung around her face. Raising her head, she shook her hair back, her face portraying a demure smile as she raised the ship in her arms.

The group surrounded her. Curious hands rubbing the smooth hull of the ship, fingers delicately examining the paper-thin sails. Kylee held the ship away from her body, one hand under the stem, the other with a firm grip on the keel so they could see the moving rudder and tiny ship’s wheel on the deck. Words of admiration mixed with envy washed around her but Kylee ignored them all, her gaze fixed on Elkan as he waited his turn.

Finally the others finished and Elkan stepped forward, taking the ship from her hands. He ran rugged fingers over the ship, a grunt of approval his only initial comment. “You’ve got a real talent, Kylee. You never cease to amaze me.” He held the ship up and tilted it this way and that. “You have a fine career ahead of you, y’know. If you were as advanced in your other studies as you are in woodcarving, I’d be recommending you for early graduation.”

Kylee froze, her empty smile fading. “So then… you’re not?” She spoke slowly, concealing her slow-mounting fury.

Elkan shrugged, oblivious to the storm of emotion his words were causing, his focus on the details of the ship. “You know you need perfect grades in all your classes to pass. Frankly, this is the only subject you make an effort in.”

Kylee struggled not to clench her fists, to maintain her relaxed pose. A few more minutes is all she needed. She managed a nod. “I had a feeling you’d say that.”

Elkan held the ship out and she took it back with trembling fingers. “Now, for the magical demonstration?” he prodded, nodding toward the water. “I assume you had us meet here so we can see what this ship can do?”

“It’s a surprise,” Kylee replied before turning and marching toward the towering rock formation that framed one side of the beach and spilled out into the bay.

The smirk returned, washing away her fury as she climbed the rocks. “You’ll see what it can do alright,” she muttered under her breath. She clambered awkwardly, careful not to risk damaging the ship.

Everyone gathered around the base of the formation as they waited on the beach. She climbed to the top of the outcropping and made her way toward the edge jutting into the bay.

She held the ship out over the water and looked down at the group below her. “Are you ready?”

Most of them cheered – her magical demonstrations were the highlights of her carvings, though a few muttered in confusion at her actions. Elkan simply watched, one hand shielding his narrowed eyes from the sun.

Kylee pulled something from the pocket of her dress and attached it to the deck of the ship, the majority of it hanging down the side. Whispering three words, she blew them at the ship and then flung it into the sky. The momentum of her throw took it several feet and then the air rippled. Waves of magic washed out from the ship and in three breaths in expanded to the size of a true galleon, sails unfurling and flapping lazily in the breeze. The ship hovered in the sky, a rope bridge swinging from the side several feet in front of the cliff.

Kylee grinned in satisfaction before shouts from below caught her attention. Her classmates were pushing each other and scrambling to climb the rocks.

“I’m sorry, Elkan. I tried to do things your way but I do not intend on passing my other classes.”

Taking a breath, she stepped back and then launched herself across the six feet of open air, her hands grasped the rope ladder while her feet found their purchasing. With quick, strong movements, she pulled herself up the ladder and climbed onto the deck. Hoisting the ladder after her, she dropped it at her feet to the irate insult of her spurned fellows.

She looked down where Elkan stood, no longer shielding his eyes in the shadow of her ship, an expression on his face she couldn’t read. Finally he spoke. “Don’t do this, Kylee. It’s your only hope of a true future.”

She laughed deprecatingly. “No – this is my chance of a future. I will rule the sky as I ruled the sea before you locked me on this forsaken island. It was your mistake thinking you could change me – and underestimating my magic.”

She whispered again, the words indecipherable yet echoing across the beach. There was another ripple and the entire ship shimmered and vanished along with its captain. “Good luck finding me, Elkan. But you’re welcome to try!”

Her laugh rang out across the bay, splashing with the waves as they broke along the shore and gradually fading as the invisible ship sailed off to parts unknown.

To read the other entries, please check out the wrap-up post here.

This site uses Akismet to reduce spam. Learn how your comment data is processed.